For the Silica neXus project, I’ve created a variant of the Han Solo Blaster that will be a treasure drop for our early adopters of the DROID utility token. I developed this 3D model in Lightwave 3D and animated it in Layout. This is a funny photo which I think demonstrates how Harrison Ford felt about his role as Han Solo. Unfortunate the character ended the way that it did. What a waste of story opportunity and character potential.

Is this a foreshadowing of the contempt Harrison felt for the Han Solo character? I’ve watched quite a few interviews down through the years, and he never seems to love his work in the Star

I examined a lot of photos for reference on line while building this model in 3D. It’s not perfect, but I think it’s close enough to be recognizable and at least an example of a class of weapons in the Star Wars universe. This particular image was very helpful. I believe it is one of the props used in a Star Wars film.

The Convergence of 4 Dimensions, LLC team needed a treasure item we could drop somewhere in our game development project to reward our early adopters. This was the motivation for the Blaster Project. 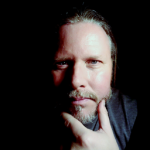